I am writing this post to describe the word “speedoholic” which I started using long time back. While creating online accounts dedicated to motorcycling I needed an alias, and that is when this word came into picture. After realizing that my twitter handle need not be my name, the only word that I could think of was speedoholic. Though you will find it’s meaning in the Urban Dictionary it is still not a proper dictionary word.
I gave this definition to myself because it was really hard for me to drive slow as a teenager. Even today I can not promise that I won’t get another adrenaline rush and start speeding through.
I have been through accidents, I have claimed insurances and I have broken my bones. But I have been addicted to this thrill and the only thing that scared me is that I may hurt someone who wasn’t expecting any such fortuity. Though I always knew this fact, I never tried to understand it truly. There’s always been a counter question, “Even crossing a road is risky, then should we simply stay on our side of the road?”

I may be capable of driving fast without causing any accidents because of MY own mistake, but I also know that driving safe is going to cut the chances of accidents that are caused by the mistakes of OTHERS. Someone told me that one should never expect other people on road to be driving in the right way. One of the reasons being that most of the licenses that are issued are claimed to be made illegally without conducting any tests. Moreover there are vehicles like tractors, drivers under the influence of alcohol and we can’t keep slapping every other pudding head on the road.

I am able to write this post with a changed perspective because I have driven below 50 kmph since two weeks already. The reason at first was to make sure that the newly installed piston can correspond with the engine. 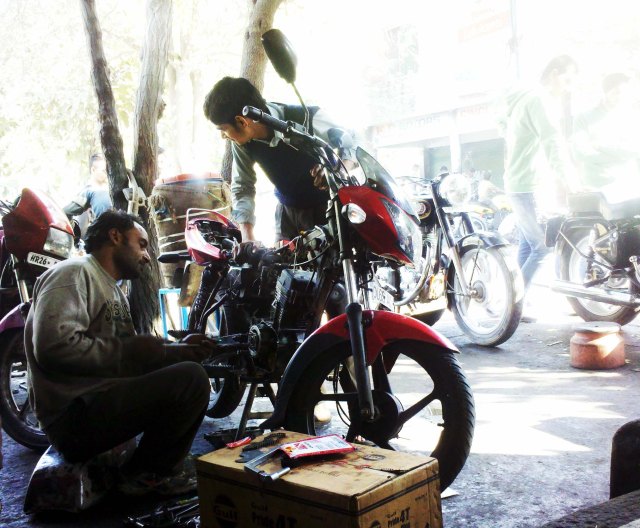 Anthony working on the engine

I had to get the engine work done just after 29K kilometers because the engine oil leaked out during one of my long rides.
After riding with the experienced bikers like DBBR and Free Souls I am confident about driving with composure. As for pure thrill, I have found other means of living it and I would only do stunts at a place which is meant for them.