I was preparing a sales pitch for introducing the idea of Toastmasters to my audience. That is when I decided that I shall use the most popular medium of conveying information these days, called infographics. I started off with a google search which took me to the list of tools at hongkiat.com. I first created an infographic by providing my Linkedin profile details to vizualize.me. After going through a few more options and watching some videos, I finally started working on easel.ly. This post has some of the infographics that I created with this online tool within an hour or so. I am planning to use them in my presentation about Toastmasters and will be looking forward to the audience’s response.

“Every day above ground is a good day.” But what makes that day better is something that you can decide. After working for more than 9 hours (on clock) you need something to make you feel better. Unless you are an Apple developer with a 7-figure salary, your job is not going to do that for you. Toastmasters international has given us an opportunity to do just that; to come out of our 6 by 6 cubicle and use our voice to communicate our thoughts. Yes, this cannot happen over a Virtual classroom session, and yes this does not need a 6 digit passcode. But the way we interact in this room is far more clear and meaningful than any of the conference calls that you have attended today. And we are not alone in this. We have more than 292,000 comrades spread over the globe. That is more than twice the population of our favorite holiday destination Shimla. There are about 14,350 clubs functioning now in 122 different countries. Today I am going to put many such facts in front of you and let you decide the definition of a Toastmaster. 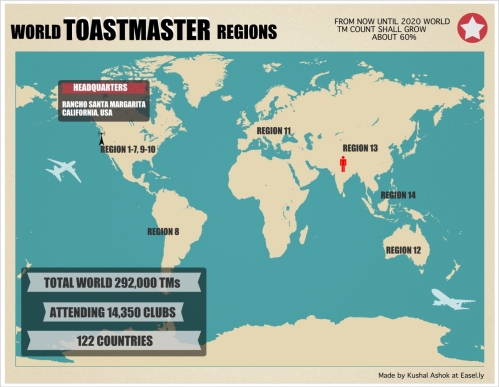 So where did this all begin from? There must be someone who thought about this first. Do any of you know the name of that person? Yes. It was in 1924 when Mr. Ralph C. Smedley organized the first ever Toastmasters meeting in Santa Ana, California. It took him two years to open a second club in the same city but then it gained momentum and within a year, the federation of toastmasters clubs was established. With the number of clubs increasing, it became difficult to keep up similarity, to follow the same rules. Because no matter how well you communicate with a person, you can never create a carbon copy of your thoughts in his mind. That is when the first manual for Toastmasters clubs was introduced in 1928.

In 1930, Toastmasters International got incorporated and the newsletter was rolled out. Thus it was clear that clubs were being formed outside of United States. The first of which was chartered in British Columbia, Canada. With more and more clubs being chartered, in just 8 years the count reached a 100. Remember that when I refer to 8 years as ‘just’, I am talking about chartering 100 new clubs when the task of introducing the idea of Toastmasters was totally different from giving a power-point aided presentation. And with the advent of the 100th club, began the inter-club speech contest.

30 years went by, and Mr. Smedley continued serving this non-profit educational organization. Thus, in 1963 he was acclaimed with the Golden Gavel award. After 2 years, he died; but he left an idea; an idea that we all are celebrating here today; an idea that has changed thousands of lives. But did you know that Toastmasters clubs were only open to men? It was only in 1973 when women were welcomed as club members. And as I will show you with the help of my next graphic, this gender base got quite strong.

As with the timeline, technology was developing fast. In 2007, the toastmasters.org got completely redesigned. Though I am not very impressed with the present design either; I felt better when I learned that not only a twitter feed was launched, but also an e-learning platform was developed in the year 2009. Finally in the year 2011, a major step was taken which is most important for any brand’s development. A unique logo was designed and was propagated to all the clubs via various brand refresh techniques such as the video brand contest. 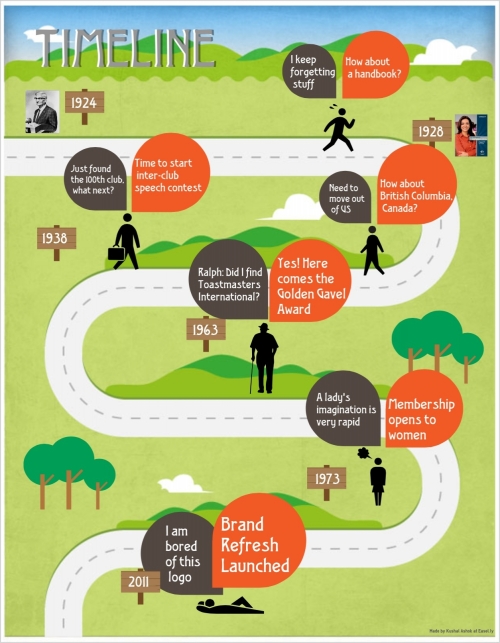 When I compared the member count to the population of Shimla, I was talking about a specific group of people. So definitely, we need to look at who these people are. In contrast with the fact that women started joining 50 years late, the average percentage of female members in a Toastmasters club is 52%.

It is often said, “Behind every successful man there is a woman”. But in this case, along with every successful man, there was a successful woman. This fact gets established when we look at the average annual income of toastmasters which ranges from 50,000 to 75,000 dollars. 30% of these members earn more than 100,000 dollars annually. And I assure you that I am not talking about billionaires like Dhirubhai Ambani or Subhash Chandra Goel who never attended any college. Most of these members have a Bachelor’s degree and 35% of them have completed their masters too. These masterminds are working at renowned corporates like Google, Apple, Sony and Disney.

So what makes you a Toastmaster? I mean, who is a Toastmaster? What does this person do? I will take the help of this Venn diagram to explain. The three essential ingredients are confidence, voice modulation and content. To have an effective stage presence you need proper gestures that you can use while showcasing your acting skills. Your expressions play an important role in convincing your audience. You should try practicing in front of a mirror and learn when to change the pitch and tone of your voice. While such practice sessions help you remember the content, only with experience can you meet mastery. And as you gain confidence, the importance of the other factors starts reducing. For instance, if you don’t have this big pie of content ready. Just take part in the table-topics and try to speak impromptu. At the end of the day, this wish to speak is what makes a toastmaster.