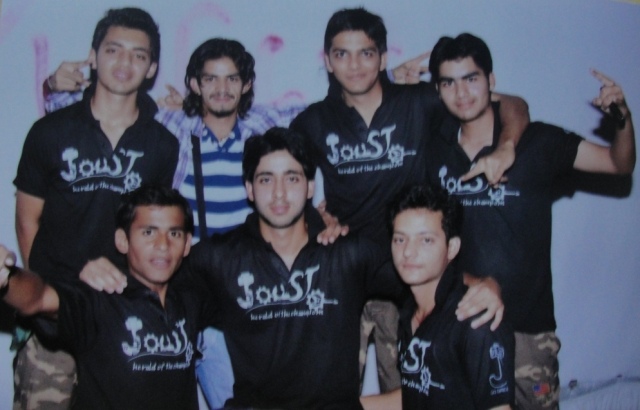 Wryers, a dance group formed by the students of UCoE, Punjabi University in April 2010. It composed of just 6 friends who decided to go against all odds and try their dancing skills with the help of their choreographer “Rajat”.

They performed during their college fest called ‘Joust’ and although they didn’t get any prize; the sense of accomplishment was enough for them.

All this started as our zeal in saltation. I for one have been convoluted with dance since always. Whenever I heard the beats of music, something inside me led to an unconditioned reflex. Dance for me has never been just a skill. I regard it as a way of life; the means by which one could blank out all his vexations and let his adrenaline flow. It does please the audience, which has been considered the main reason behind dancing since always. However, the real delectation is garnered by the dancer. When you let it out, you are not just moving your body; you are interacting with your soul.

The crowd was hooting and the stage was set. We took our positions and the announcement was made. The curtain opened and wryers were facing the audience for the very first time. There was a sudden black out in my mind. I was not thinking back and the beats were making me move in a reflex manner. The smoke was led out all of a sudden and I couldn’t see anything evidently.

I have been talking with my friend Abhinav about joining a dance school. When I discussed this persuasion with Sahil, he ingested to join us. So we started rummaging for a school and even roamed around the city to find one that would meet our prerequisites. We finally adjudicated a school and scheduled our classes in the evening.

We started learning from the basics and were using lento. There were two teachers and one of them was assigned to us. But we took all the opportunities to learn from the other one as well. The main reason behind it was that his steps were easier to learn and boosted our confidence. The main reason for our slow pace of learning was the lack of practice. We could not practice anywhere other than the dance school, which we could use only for one hour. Anyways, we were having fun and savoured every evening to the fullest. Each day we entered the dance hall with enthusiasm and left with sweat. The walk back to our places consisted of talks which made us belly laugh.

The first month of our dance school was about to end and we wanted to make it huge. We decided to make a dance group and started asking our buddies to join. We persuaded 5 girls and 3 more boys and asked our dance teacher to choreograph us in the university itself. The first class took place at the velodrome and we were exhausted very soon as the sun was drinking up our stamina. We managed to learn a few steps despite of the frequent breaks.

We were supposed to pay the advance fee to our choreographer before his next visit. Issues started unfolding as the girls gave excuses one by one. Some were genuine, some were not but all we cared about was that we wanted each group member to dance willingly. Thus, we gave our farewell to the girls and added one more boy to make it a group of 6 viz. Abhinav, Sahil, Piyush, Ishu, Varun and me (Kushal).

Chapter-5: Where to practice?

There were many problems to be resolved each day. We had to wake up early and setup the speakers and laptop. All members were to be called and ensured for their timely arrival. The worst problem was to find a place for practice. The velodrome was no good as we couldn’t take the heat; the college was not giving us the permission to use the premises. But, we did practice at our college basement during college hours for once. So we settled for the open area behind a building called ‘Kala Bhawan’. It got covered with mud and fallen leaves and required cleaning each morning. There was no fixed venue and we used many other open spots wherever we could find enough space and an electric port. I bought an extension and made arrangements at my flat’s roof so we could practice in the evening when the sun goes down.

Chapter-6: The night before

It was one day left for our performance and was our choreographer’s birthday as well. We got the food packed and decided to party at my place. We danced for hours and didn’t sleep till 2am. No we were not practicing; it was the random posse dance which we were doing. We were so exhausted and dog-tired that we didn’t feel comfortless when 7 of us lay squeezed on a double-bed.

We reached the venue where competition was to be held and arranged our goods to get ready for the performance. We were given a time-slot to have our final practice, which was hard to get as many other groups were already waiting. We performed well and got astounded by the applause given by the fellow dance-group of our college called TNT. This human action yielded lot of respect for TNT in our minds.

We were on the stage, performing for real. The smoke was led out all of a sudden and I couldn’t see anything evidently. What followed was an out of body experience for all of us. We were constantly applauded and hooted by the crowd as there were lot of buddies out there among the audience. We finished the act well despite of the mistakes which we all acknowledged individually.

This was the first time for all of us to give a dance performance on stage. As for the prize, the applause and greetings we pulled in from our mates were priceless. We learned a lot of things from the first day of our practice till the day of performance. Being a group is itself an achievement when you know that your pardners are there with you. 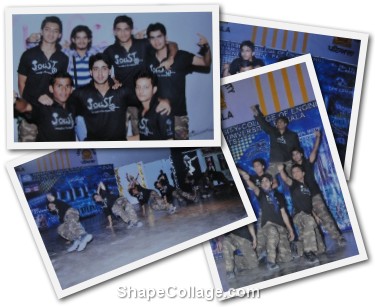 P.S.: “Dance can make you palpate antithesis of poignance.”

This site uses Akismet to reduce spam. Learn how your comment data is processed.